Apple announced today that it will be live streaming the Worldwide Developers Conference (WWDC) 2014 keynote next week, on June 2 at 10 AM PT (1 PM ET). The company has updated its homepage with a new page where you will be able to watch the event live as it unfolds. To watch the live stream, users will need a Mac or iOS device running Safari, or an Apple TV. Apple only sometimes streams live video of its special events, and never announces its intent to do so this far in advance. 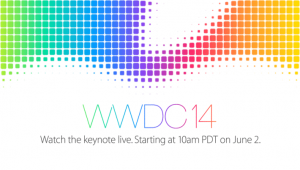 Although the WWDC events have traditionally been about software and developers, in recent times Apple has been known to also announce new hardware products at these events. The company doesn’t say what’s going to be on the docket at the show, but it does say that it’ll be making “exciting announcements.”  Last year, the company announced the new Mac OS X Mavericks, along with iOS 7 and the new Mac Pro.

This year, Apple is expected to announce iOS 8, the next version of OS X and possibly some new Macs or (more likely) updates to the existing ones. Rumors suggest we could also see news from Apple regarding health tracking and home automation platforms, but regardless it’s bound to be an interesting show with plenty of news to dig into.