Samsung today launches another variant of Galaxy J5 Prime and Galaxy J7 Prime smartphones in India. The Korean smartphone manufacturer has confirmed it via the official Twitter account. 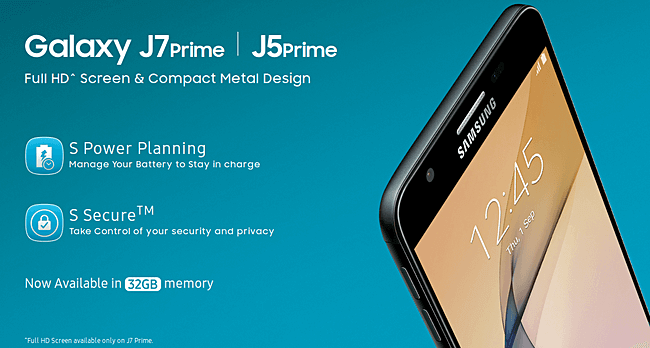 Apart from the changes in storage, there is nothing new in this device and all other specifications remain as earlier.

In terms of specification, Galaxy J5 and Galaxy J7 Prime both comes with an octa-core Samsung Exynos 7870 processor coupled with 3GB of RAM. It supports a microSD card which allows to further extend storage up to 256GB.

Both the smartphones have a 13-megapixel rear autofocus camera with f/1.9 aperture and a LED flash, while there is an 8-megapixel front-facing camera for taking selfies. These smartphones have dual-SIM options with 4G connectivity, though only one can connect to 4G at a time. The device connectivity options include GPRS/ EDGE, 3G, Wi-Fi 802.11b/g/n/ac, GPS/A-GPS, Bluetooth, and Glonass.

The difference between these two devices stays with its display and battery. Galaxy J5 Prime sports a 5-inch HD display and a smaller sized 2400mAh battery while the Galaxy J7 Prime has a slightly bigger 5.5-inch full-HD display and non-removable 3300mAh battery. Both the device runs Android 6.0 Marshmallow with Samsung’s own TouchWiz UI layered on top.