South Korean electronics giant and world’s biggest smartphone maker, Samsung has announced that it is upgrading its digital assistant with a new version called Bixby 2.0. Samsung is also making the new iteration of its digital assistant compatible with many more devices such as mobile phones, home speakers, TVs, et al. Previously, it was launched exclusively for Samsung’s flagship Galaxy devices. This up-gradation will set up Bixby against Amazon’s powerful Alexa which has already got a foothold in the artificial intelligence sphere. Alexa is an AI program that powers Amazon’s connected devices such as speakers and other third-party home appliances.

According to Samsung’s Executive Vice-President, Eui-Suk Chung, “Bixby 2.0 will be ubiquitous, available on any and all devices.” He also stressed on the credentials of Bixby as a powerful digital assistant that heralds the start of a new paradigm shift in devices, “This means having the intelligence of Bixby, powered by the cloud, act as the control hub of your device ecosystem, including mobile phones, TVs, refrigerators, home speakers, or any other connected technology you can imagine.”

The rollout of Bixby 2.0 by Samsung can kick-start a whole new race amongst the world’s top tech companies in competing for the coveted title of the world’s most powerful digital assistant. Although for that to happen, we will have to probably wait for a few more months since Bixby 2.0’s current iteration will be available only to developers. 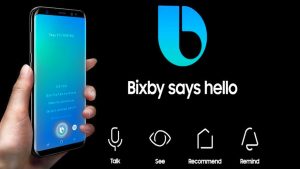 These are surely interesting times as digital assistants have long been regarded as a stepping stone in the assimilation of artificial intelligence with our lives. Samsung’s tech rivals, Google and Microsoft have already launched their own digital assistants: Google Assistant and Cortana that can be used for connected automobiles and smart homes via IoT (Internet of Things) to take on Alexa, the perceived leader of the AI sphere at this juncture.